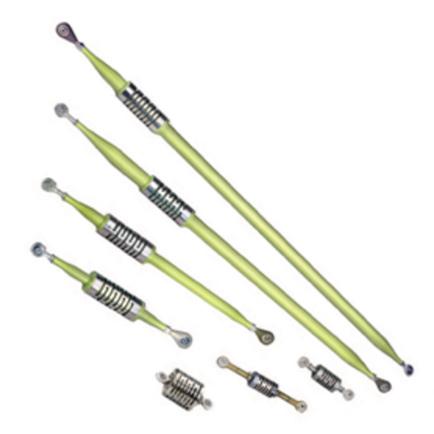 • Balanced output in tension and compression

The slope of a best-fit straight line drawn through the output data. A force sensor is a radiometric device and the sensitivity should be expressed as the ratio of the volts out (V1-V2), per volt in (VE), per pound of displacement (V/V/lbs).

The maximum deviation of any calibration point from a specified straight line. The error is usually expressed as a percentage of Full Scale output. The most commonly used line is the “Best Fit Straight Line” (BFSL).

The term used for multiple channel units to describe the voltage produced in the secondary of one channel by the primary excitation of another channel.

The maximum allowed deviation from the nominal output, when the output is taken per the previously stated sensitivity definition. Typically specified as a ± percent of full scale.

The uniformity of performance between channels of multiple channel force sensors. Each channel’s output is compared and the maximum difference between any two channels is termed “tracking.” Tracking is normally expressed as a percentage of Full Scale.

The algebraic difference between the nominal outputs at the ends of the electrical stroke. (Ref. Instrument Society of America, ISA - S37.1 - 1975)

The % change in the force sensor sensitivity over a temperature range.

Usually defined as a percentage per 100°F max.